Are you marketing to teens only through Facebook? If so, you could be missing out on reaching the majority of them. 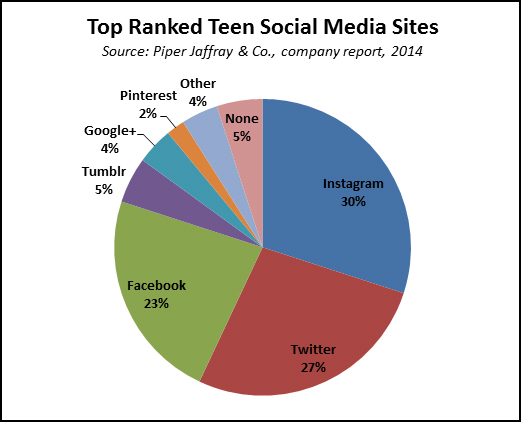 A recent Piper Jaffray & Co study of 7,500 teens in 48 U.S. states  revealed the top social media site for teens is Instagram at 30%, followed closely by Twitter at 27%. Facebook follows at 23% and 5% of teens reported not using social media networks.

The biggest surprise of this report is the rapid decline in teen use of Facebook. As recently as Fall of 2012, Facebook was reported as the most important social networking site for teens at 42%. Now, just a year and a half later, Facebook’s popularity among teens has declined by almost half, while Instagram has nearly tripled. Twitter has remained fairly steady in the mid to high 20% range.

What Does This Mean?

With all the stimulation we are exposed to on a daily basis, our attention spans have been decreasing significantly over the past several years. We have so many more things to pay attention to, many simultaneously, so messages consisting of images and short text blurbs are easier for us to process versus lengthy text. So it’s no wonder teens are more attracted to Instagram, which is made up of images and Twitter which has a 140-character tweet limit, keeping communication very brief.

Targeting the teen demographic now requires more images and minimal text. Messages will need to be designed to attract through imagery, catchy phrases and relevant hashtags.

This report goes to show how quickly social media usage can change among a demographic. While it’s important to continually adjust  your social media strategy to hit your target market effectively, it’s also wise to maintain a consistent presence on multiple networks.

Most social media sites allow and encourage sharing content to other social media sites. This is a great way to easily maintain a presence among multiple sites without a ton of effort. For example, it’s a good practice (if relevant) to share photos to Facebook, Twitter, Tumblr, Flickr and Foursquare when uploading to Instagram. One photo, six social media sites, all at once.